“Starry Starry night
Paint your palette blue and grey
Look out on a summer’s day
With eyes that know the
Darkness in my soul….”

What I remembered most about Van Gogh was that he cut off his own ear. His was a tragic life. He suffered from mental instability and died young after supposedly committing suicide, age 37. He suffered from depression and seizures and was prone to hallucinations. He had previously followed a religious path and when that failed, he still embraced his spirituality and sought to tap into the mysterious through his art. He sadly did not see success in his lifetime and was unfortunately considered eccentric, crazy and a failure by some. A tortured and misunderstood genius, only gaining notoriety after his untimely death.

The infamous painting “The Starry Night” now hangs in The Museum of Modern Art, in New York. His other work hangs in various museums all over the world.  The largest collection of his work, with over 200 of his paintings can be found in the Van Gogh Museum in Amsterdam. It was also made into a song “Vincent” by Don McClean. It was written by the singer in 1971, to pay tribute to Van Gogh, after reading a book about the artists life and work.

Starry Starry night
Paint your palette blue and grey
Look out on a summer’s day
With eyes that know the
Darkness in my soul.

Shadows on the hills
Sketch the trees and the daffodils
Catch the breeze and the winter chills
In colours on the snowy linen land.

They would not listen
They did not know how
Perhaps they’ll listen now.

And now I understand what you tried to say to me
How you suffered for your sanity
How you tried to set them free.
Perhaps they’ll listen now.

For they could not love you
But still your love was true
And when no hope was left in sight on that starry
Starry night.
You took your life
As lovers often do;

But I could have told you
Vincent
This world was never
Meant for one
As beautiful as you.

Like the stranger that you’ve met
The ragged men in ragged clothes
The silver thorn of bloody rose
Lie crushed and broken
On the virgin snow.

They would not listen
They’re not
List’ning still
Perhaps they never will.

In 2017, “Loving Vincent” the world first fully painted, animated feature film, created by over 100 different classically trained painters, was released in the cinema. It played at various film festivals, received great critical acclaim and went on to win numerous awards. It breathes life into Van Gogh’s artworks and uses his paintings to tell the story of Vincent’s life and in particular focuses on the events surrounding his Death. On his deathbed, Van Gogh’s heartbreaking farewell words to his brother were “the sadness will last forever”.

I believe “Starry Night” as metaphor, represents inner turmoil. We all have a starry night within us. A wealth of power and creativity and the ability to be a shining, magical star, yet also the ability to sabotage ourselves and have a Dark Night of the Soul.

It’s important to see the light in the darkness, to follow what we believe in, to harness the power of our Dreams and Imagination and to begin the journey of creating a Masterpiece. We all have the tools to make a rich tapestry of our lives and as Henry David Thoreau said; “Out truest life is when we are in dreams awake”.

When times get tough, remember the timeless words of Martin Luther King, “Only in the Darkness can you see the Stars.” Sometimes our darkest night can inspire our greatest work. Our greatest achievements in life can be born of the dark skies of struggle that open up to reveal the bright lights of imagination and inspiration. So follow that North Star! 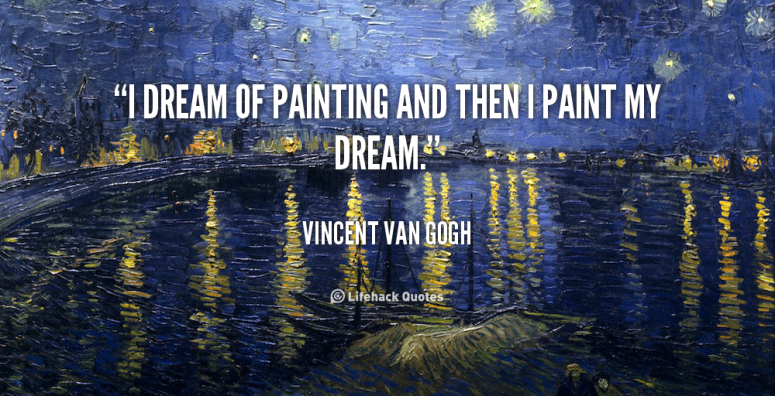 I remember seeing a music video on youtube, over a decade ago now, called “Starry Starry Night”, from a beautiful and talented singer called “Corinna Fugate”. I thought it was a haunting and beautiful song with an ethereal quality. About the Starry Night within her. “Beneath the Star’s Canopy, I’ve got a Starry Starry Night inside of me.”  She has disappeared since then. But Urban Dictionary has this to say about her…

She has since released five independent albums: The Deeper You Go, the Higher You Fly, Chasing the Ghost, The Other Side of the Sky, Undertow, and Snow White. She was very popular on the internet for a while, where she had a Myspace site with thousands of friends. She would chat with her friends, make her own music videos, and blog about her life.

In March of 2008 Corinna suddenly revealed that she was going to delete both of her Myspace pages. It was a shock to everyone, and no one knows where she is or what she is doing to this day.” 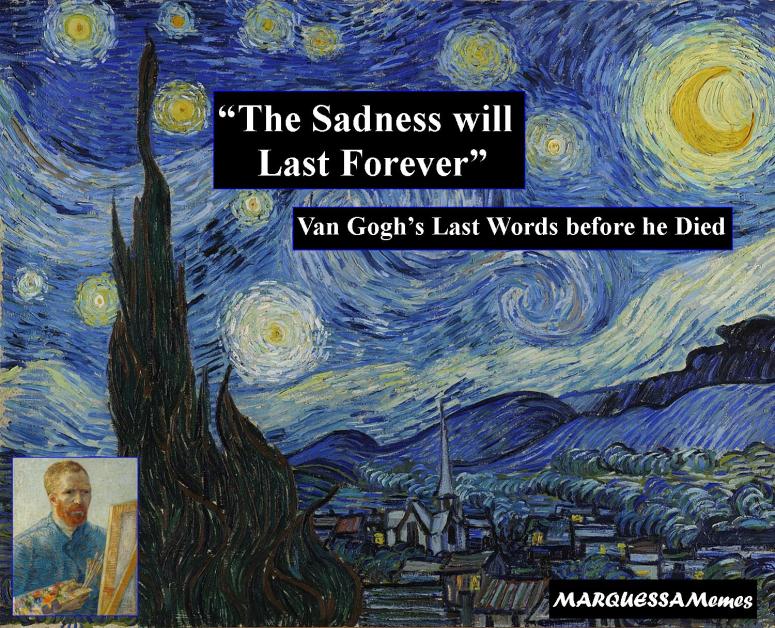 Corrina Fugate did disappear but she also re-emerged. She reinvented herself as Rose Mercury and created new music. She was reborn so to speak.

If we learn one thing from Vincent Van Gogh it is that he is now recognised as an Artistic Genius and his painting “Starry Night” is one of the most famous and celebrated paintings on the planet, captivating and inspiring countless people and also providing solace for some. Yet in his lifetime he did not achieved this status and recognition. Only in death.

Still, he didn’t give up, he kept on painting. Why? Because he was a Painter. So Vincent’s message to us is do what you were meant to do. Because you can only be the person you want to be. You must follow what you are passionate about. There is also the message that perhaps he did not realise his greatness within himself in his lifetime. He found it hard to accept compliments, it often embarrassed him and he felt he had a lot to learn.

But, he was determined and wanted nothing more than to be a painter. So he painted day and night because it was a passion. He kept doing this despite the fact that he rarely sold a painting. Because this was his calling and what gave his life meaning. And so we, in our lives must seek to recognise out talents and not be afraid to put ourselves out there. And continue to do so. And not give up. We must have faith in ourselves.

Van Gogh’s story moves us because we wanted him to believe in himself more and be more happy. We wanted him to see success in his lifetime. We see in Van Gogh a part of ourselves. A humble quality. A feeling we may not be good enough. Yet the realisation we are not reaching our true potential. That we may have amazing talents or qualities we need to express. We admire Van Gogh for being a painter because he wanted to be an artist and so he held strong to that. He reminds us we too must not let our passions die and must follow any creative calling. Live the True Life.

We were not put on this planet to hide away or simply conform and give up on our hopes walking down the wrong road instead of heading in the direction of our dreams. We must endeavour to sparkle like shining stars, no matter how dark the days are, realising that within each of us, lies a unique gift or talent we have to offer on this earth. If we don’t embrace our inner artist in this lifetime we will not be known for our unique gift in this life or after we are gone because we never embraced it. Embrace it. Shine. The brightest stars may emerge from the darkest nights.

(This article is the property of SupernaturalHippie.com – No unauthorised reproduction without prior consent.)