Before we Begin – Did You Know – “The Wizard of OZ” movie celebrates it’s 80th Anniversary this year, celebrating with Screenings this January in Cinemas all over the World… An Iconic Classic in a Golden Age of Cinema, it is now regarded as a Cult Movie Masterpiece. The Best Stories are always Timeless and this film will always be Enchanting to all ages.

Have you ever wanted to Follow that Yellow Brick Road? I do… Ever since watching The Wizard of OZ as a child, I’ve thought how remarkable it would be to ever chance upon a Vibrant Sunshiny Yellow Brick Road, Sleep in a field of Vibrant Red Poppies or Gaze in Awe at an Enchanted Emerald Kingdom. Meeting a Wizard would be Magical too but there’s not many Merlin’s floating about!

The Wizard of OZ was colourful, exciting, enchanting, fantastical and yet a little bit scary at the same time. But that’s adventures for you! That’s why they differ from the mundane. There’s highs and lows, twists and turns, good and bad and ultimately there can be a happy or sad ending. Or you return and find yourself at the same place you were before you began. Sometimes, you even want to go back to where you wanted to leave in the first place, if the grass isn’t actually greener on the other side. You can return worse or better off, but either way you will be changed.

The Wizard of OZ Movie was released in 1939 by MGM Movies and was based on the book The Wonderful Wizard of OZ by Lyman Frank Baum, published in 1900. I know a lot of people have seen the movie but less have read the book.

“The novel is one of the best-known stories in American literature and has been widely translated. The Library of Congress has declared it “America’s greatest and best-loved homegrown fairytale”. (Wikipedia)

The film starts in black and white then bursts into technicolor when Dorothy arrives in OZ. Dorothy lives on a farm in Kansas and decides to run away when a neighbour wants to have her beloved dog Toto euthanized after he bites her. She’s an animal lover, dreaming of a better life, Somewhere over the Rainbow. A Fortune Teller informs her that her Aunt may be dying of a broken heart and she tries to get home, a Tornado strikes, she makes it to her bedroom then awakens in the Land of OZ.

Dorothy (Played by Judy Garland) is hailed as a Heroine as her arrival coincides with the Death of the Wicked Witch. The Wicked Witches sister swears vengeance on Dorothy (even though it technically wasn’t Dorothy’s fault the house landed on her) and the Good Witch, Glinda tells Dorothy to Follow the Yellow Brick Road to Emerald City and ask The Wizard of OZ for help to get back home.

The Yellow Brick Road viewed simply was the path that Dorothy must follow to fulfil her Quest, meeting Kindred Spirits and overcoming obstacles along the way. And that straying from the path leads to trouble. Kansas was Dorothy’s Comfort Zone but she wasn’t happy due to life events, but only upon ending up in a new place was she desperate to return to the Farm.

The Tornado can be viewed as a kind of Tower of Destruction force, obliterating everything and leading to dramatic events. “Nature abhors a vacuum” (Aristotle) and comfort zones are empty, stagnant places, which can actually be deadly. If we don’t make changes chaos can come calling and sometimes if we don’t push ourselves, we are pushed. And it can clear the way for a much needed new direction. 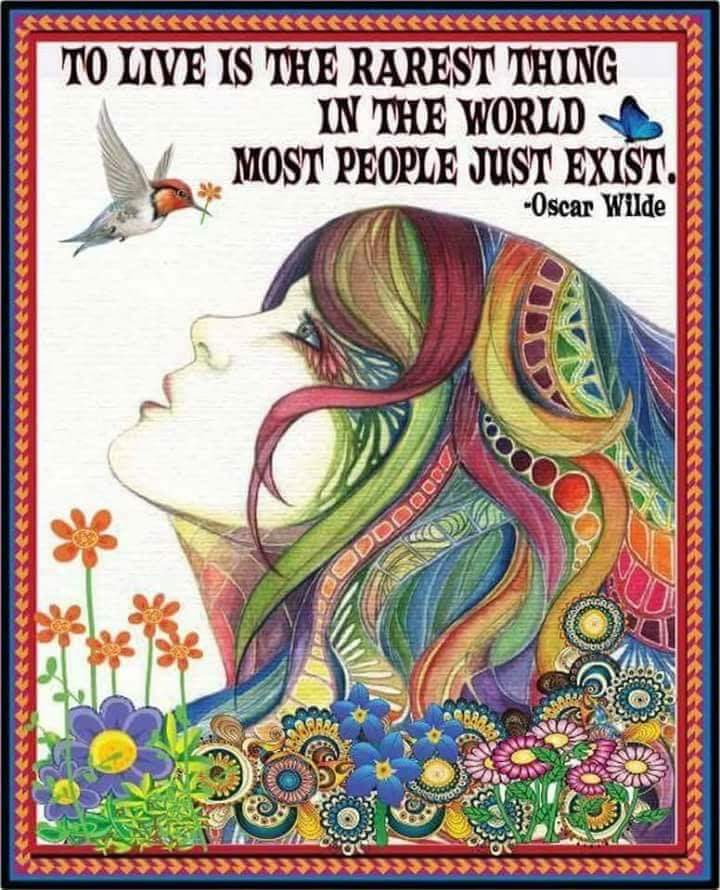 The Yellow Brick Road features in other Oz related movies that were to follow, notably, Oz- The Great and Powerful. It was released in 2013 by Disney and is another superb movie and prequel to The Wizard of Oz, centring around a Power Hungry Magician and Con Artist in a Travelling Circus, played by James Franco. Again he encounters trials and tribulations, does a lot of self reflection and finds himself Transformed.

Comfort Zones can be grey and mundane suffocating places whereas Adventures can be enlightening and expansive injecting colour back into life. They can also be nightmarish and deadly. There’s a fine balance between escaping the mundane and monotony and having an adventurous life. The key is that you are in control of your own adventures as much as you can be. And always have a back up plan!

Sometimes you only realise what you had when you step out of it. And it can sometimes be a Spiral taking you back to where you began. Or it can lead to new horizons. Ultimately though, once you set foot on any yellow brick road, your life will undoubtedly be transformed on some level. And first steps in the right direction can be Magical! 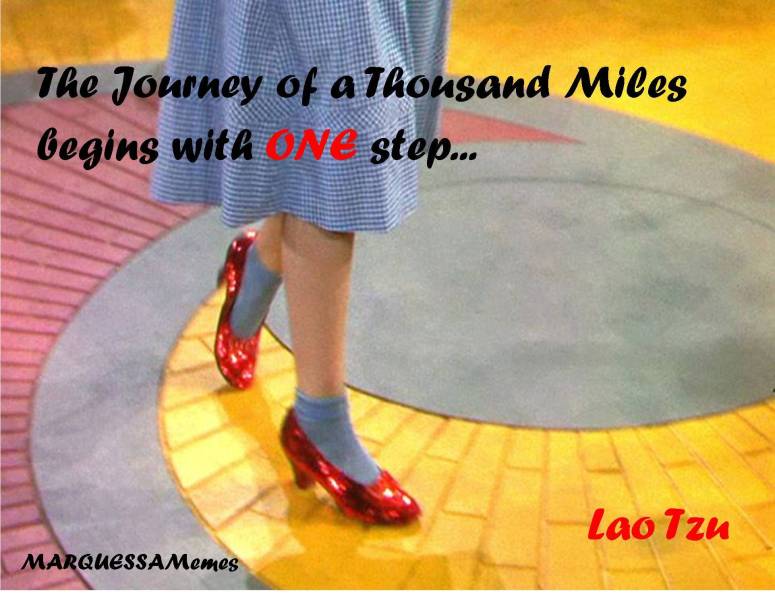 The Author of the Wonderful Wizard of Oz was a Theosophist and the story is a very Mystical one with a lot of Symbology and layers of meaning. L. Frank Baum was a member of the Theosophical Society, who engaged in Occult Research and the Comparative study of Religions and believed every person has a Divine Spark and can progress to Spiritual Fulfilment. The Wizard of Oz can be seen as the Souls Journey to Enlightenment. In Buddhist teachings there is also a Golden Path. In many religious and spiritual teaching you can find similar concepts.

The lyrics for Goodbye Yellow Brick Road were written in 1973 by Bernie Taupin and the melody composed by Elton John. It directly referenced the Wizard of Oz. Some think it was about the celebrity lifestyle not being all it’s cracked up to be and fame and fortune being a double edged sword. That the metaphorical simple life on the farm may in fact have been richer. After all, what the heart sincerely desires can never be replaced by material wealth.

The lyrics are about giving up a life of opulence for one of simplicity in a rural setting.

Bernie Taupin wrote the lyrics to this and a lot of Elton’s other songs.  It was based on his own experience of wanting to get back to a simpler life after being mistreated by a wealthy, socialite lover. It was written at a time in his life where he wanted to get back to his Roots.

I don’t believe I was ever turning my back on success or saying I didn’t want it. I just don’t believe I was ever that naïve. I think I was just hoping that maybe there was a happy medium way to exist successfully in a more tranquil setting. My only naiveté, I guess, was believing I could do it so early on. I had to travel a long road and visit the school of hard knocks before I could come even close to achieving that goal. So, thank God I can say quite categorically that I am home.”

If you’ve always wanted to walk down a Yellow Brick Road in reality, you may yet be able to, if you head to Beech Mountain, North Carolina in the USA! An amazing Land of OZ Theme Park was opened there way back in 1970 attracting thousands on it’s first day. It was very successful, then sadly, suffered from fire damage in the mid 70’s and closed in 1980. It has opened sporadically in recent years on a more short term basis. And you can still find it. 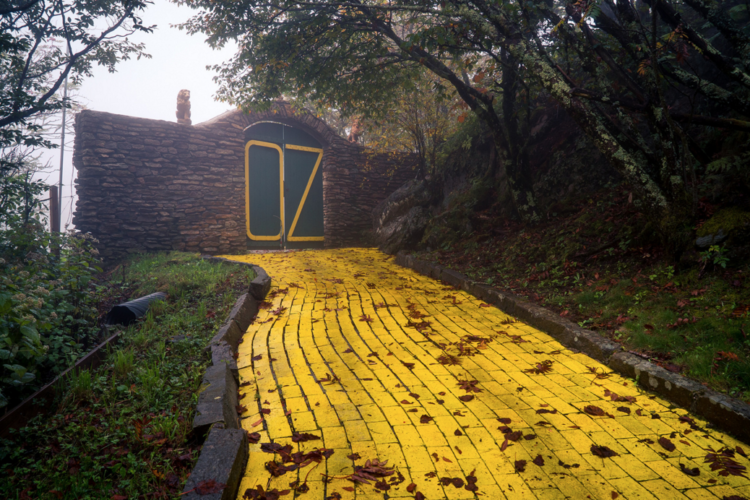 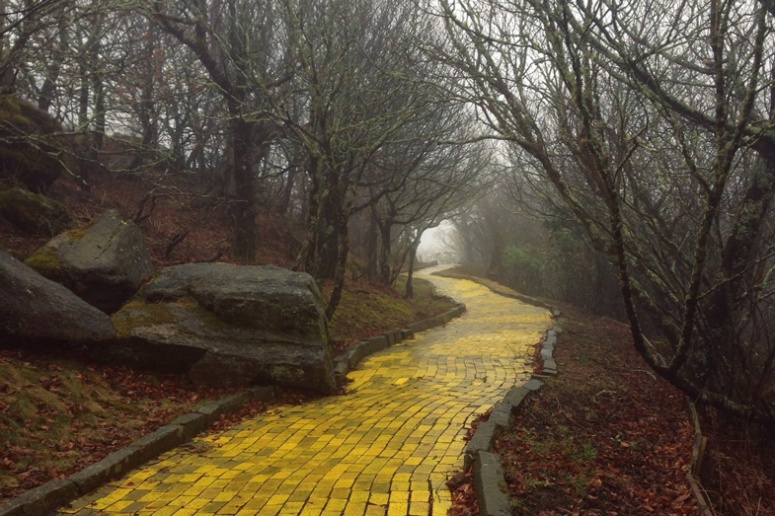 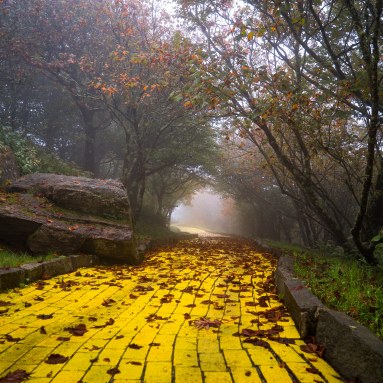 The Land of OZ Theme Park worked with the Natural Landscape itself rather than imposing upon it. A fine piece of Imagineering. The Theme Park still opens it’s doors twice a year usually for a month in the summer and a week in September. But Events sell out FAST! It would be an amazing place to visit.

Some see The Yellow Brick Road as a path of Illusion. Very inviting but ultimately full of twists and turns and setbacks, perhaps leading you on a merry dance and even a Dead End. The whole All that Glitters is not Gold concept. There is that about it. It depends what way you view Yellow Brick Roads…

Due to their Novelty and Niche Value, I tend to view them as a Call to Adventure and a step out of the Mundane. Colourful, exciting, expansive and full of Mystery. A chance to get out and do something different. They’re not for those who play safe, want to stay stuck or like staying in one place. But for some people HOME is THE ROAD…

If the Yellow Brick Road is calling, perhaps you might want to head towards North Carolina, where the Land of Oz awaits.. 🙂

When you can actually say “There’s no Place like Home” you may have finally made it. Wherever, Whatever or Whomever Home may be…

4 thoughts on “The Yellow Brick Road… Does it call you? The Wizard of OZ turns 80 this month…”