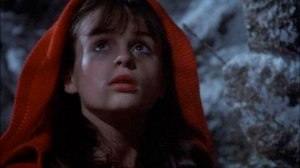 “Little girls, this seems to say
Never stop upon the way
Never trust a stranger friend
No-one knows where it may end
As you’re pretty, so be wise
Wolves may lurk in every guise
Now as then, `tis simple truth
Sweetest Tongue has Sharpest Tooth”

The Company of Wolves

Charm can be Deadly and Sweet Talkers are rarely genuine and generally Masters of Disguise. Werewolves being a prime example, clearly living in two worlds and therefore carrying a dark secret in their Heart. To survive, they must feed, and to feed they must lure Innocent Victims, which are generally young and pretty females, for this is their preferred flesh. To lure, they must seek out the girl, alone and unprotected in the Woods, appearing vulnerable, but to trap her they must have a way with words.

The Werewolf is furtive, deceitful, dangerous and deadly. Yet, although showing their dark side, “The Company of Wolves” also reveals the vulnerability of the Werewolf. Wolves have often been demonised and hunted, but they are truly beautiful creatures. Creatures of the Night. And Werewolves, are after all, half man, so they have a human element that can’t be taken away from them. And that includes, the Search for Love…

“The scariest Wolves are those that are hairy on the inside”... The words of Rosaleen’s wise grandmother played by Angela Lansbury. Enter into one of the Darkest Fairytales…. taking Little Red Riding Hood into the realms of Dreams, Death, Deception and Danger and intermingling with the Myth of the Werewolf. The Company of Wolves is a Gothic, Fantasy Horror movie that was released in 1984.

The lead role is played by English actress, Sarah Patterson, a girl on the verge of Adulthood, with the colour Red being very significant. She looks every inch a Fairytale Beauty, long dark hair, beautiful brown eyes, pale flawless skin, flushed cheeks and blood red lips. A feisty girl, yet shrouded in innocence, on the verge of breaking into Womanhood.

This is a movie with a lot of imagery and symbology. A young boy in the village is very taken with Rosaleen and she toys with his feelings, but she doesn’t want a boy, she wants a man. Perhaps she wants to leave the safety of the village and run into the Arms of Adventure…

Enter a Tall, Dark, Handsome Stranger, sinister yet much more charming than the village idiot! “….he laughed with a flash of white teeth when he saw her and made her a comic yet flattering little bow; she’d never seen such a fine fellow before, not among the rustic clowns of her native village.” (Extract from the Company of Wolves, The Bloody Chamber, by Angela Carter)

This film is based on the story “The Company of Wolves” which is one of the short stories in a collection by Angela Carter called “The Bloody Chamber”, a darkly gothic, seductive, imaginative and rich collection of Supernatural Tales. Well worth reading as the author is a genius with words and you will be instantly transported to Macabre and Gothic worlds. The Screenplay for the film was written by Angela Carter and Neil Jordan. It stars Sarah Patterson, Angela Lansbury, Stephen Rea. Micha Bergese and David Warner.

Wolves should run Free and Rosaleen wants to break free too and perhaps run with the wolves, in order to enter a Supernatural Realm and escape what could be deemed as dull reality. Her sleep is tormented by Nightmares that seem to fuse with reality. Perhaps, in Dreams, we are most awake, for in dreams, our true feelings and suppressed emotions may emerge. Rosaleen’s world becomes confused.

The film is mostly set in the Forest and the village where the tale unfolds but occasionally flits to the modern day where we often see Rosaleen in her bedroom dressed in white and either entering or waking from the world of Dreams.

Although vilified by the villagers Rosaleen finds the Wolf intriguing. She listens to her grandmothers tales about werewolves with great curiousity and intrigue, yet, she knows her own mind, a Free Spirit.

When finally confronted by the Beast and feeling scared, she realises she means no harm to the Wolf. Nor him to her. And so, leaving her childhood behind, Rosaleen strays from the path and chooses to remain in The Company of Wolves. “If there’s a beast in man then it meets its match in women too.”

The character Rosaleen is part of the main narrative of the film which then weaves in other stories creating a beautiful supernatural tapestry of tales. The stories include Granny’s tales to Rosaleen about a groom going missing on his wedding night when the “Call of the Wild” summons him and a young man in an Enchanted Forest who encounters the Devil who offers him a potion to put hairs on his chest.

Then there is Rosaleen’s mothers story about a woman who falls pregnant to a noble man who turns out to be not so nice and the lady states; “The wolves in the forest are more decent”. She then proceeds to turn up at his wedding party.

We also have Rosaleen’s story to The Huntsman about a “She-Wolf” who arrives in a village one night, emerging from a well from the world below to the world above. Despite meaning no harm to anyone she is shot by a villager and then takes human form finding care with an old priest who takes pity on her.

This film by Irish Director, Neil Jordan (Interview with the Vampire) is very special and one I will always love. It is Dark, Supernatural and Unique. It is bursting with Symbolism and also gives Little Red Riding Hood the chance to Run with the Wolves, rather than being eaten by them or having someone Kill them. (Embracing nature rather than feeling threatened by it.) Much more exciting, don’t you think? 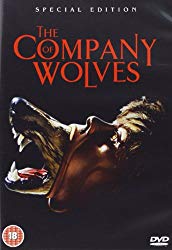 (This Film Review article is the property of SupernaturalHippie.com – No unauthorised reproduction without prior consent.)