Welcome to the niche genre that is Space Music! My Favourite Space Age type tune is “Magic Fly” by French Band Space which was released in 1977 by French Label, Disques Vogue and reached No.2 on the UK Singles Chart. It falls into the category of Space Disco which was very popular in Europe in the late 1970’s. The hit single “Magic Fly” was used as the main theme of the original Chinese version of Jackie Chan’s 1978 film Snake in the Eagle’s Shadow. The single featured on the only studio album by Space, also called Magic Fly.

Magic Fly was a global hit and a big success in the French Music Industry. You can still find some vinyl copies of the single and album, floating around in Cyber Space. Their music was the beginning of the short-lived Space Disco genre and a precursor of Electronica. It was actually written in the same apartment where Jean Michel Jarre composed Oxygene. Bands like Space had a huge influence on Electronic Music.

The Droids – The Force

Now this tune by The Droids called “The Force” from 1977 is Super Space Age! They were a one off Electronic Disco act inspired by the original Star Wars movie from 1977. The Droids were the duo of Fabrice Cuitad and Yves Hyat. They had only one album called “Star Peace” with (Do you Have) The Force being the most well known track.

If you are a collector of rare records, this was released on vinyl by a French Record Company called Barclay in the 1970’s and you can still find it on the internet. It also materialised on CD in 2008 and also featured on a few compilation albums.

Another favourite Space type tune would be “Silver Machine” by UK Rock Group Hawkwind, released in 1972, which would fall into the Space Rock category. Space Rock emerged from the late 1960’s Psychedelic Music scene in Britain. Pink Floyd also had several pieces of very Experimental Music in this genre.

The lyrics for Silver Machine are a send-up of Space Travel, inspired by the Alfred Jarry essay “How to Construct a Time Machine”. This was by far the biggest hit for Hawkwind, reaching No. 3 in the UK and getting played on the TV show, Top Of The Pops. It was re-released in 1976, 1978 and 1983. 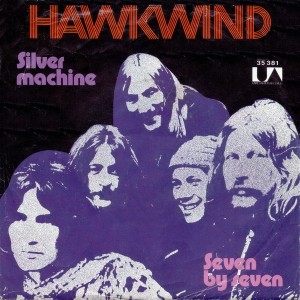 Bass player Ian “Lemmy” Kilmister sang lead on this track. Lemmy, who later formed Motörhead, wasn’t the group’s main singer – that was Bob Calvert. But in the end Lemmy’s vocals were chosen over Calvert’s.

“Lemmy had a high voice but it was just very much more powerful, he had a gruffness with it, so we decided to use his vocal,” their manager Doug Smith explained. Calvert, who was in hospital at the time for manic depression, didn’t find out that his vocal had been replaced until later and was not too pleased about it.

I will never forget the Space Age Levi’s commercial from 1995, with the Spaceman tune. That was really cool. It was called “Planet” and was set in a 1950’s inspired Alien Neighbourhood where anxious parents were pacing and nervously awaiting the return of their teenage daughter.  Played by Russian Model Kristina Semenovskaya, she emerges from a Space Ship in a sparkling bikini top and a pair of levi’s.

Here’s the full version of “Spaceman” by English Rock Band Babylon Zoo. Spaceman was released in January 1996 and was the lead single on their debut album, “The Boy with the X-Ray Eyes.” It reached No.1 in the UK Singles Chart after the popular Levi’s Ad and was the fastest selling single in the UK in 30 years since “Can’t Buy me Love” by The Beatles! It was a No.1 hit in 23 countries and was one of the best selling singles in the history of the United Kingdom.

I lost my heart to a Starship Trooper

“I Lost My Heart to a Starship Trooper” was released in 1978 and performed by Sarah Brightman and Hot Gossip. It was the debut single of Brightman as a singer, who was just 18 at the time, and reached No.6 in the UK Singles Chart.

The song is a lightweight Space Disco track that cashed in on the popularity and media hype surrounding the original Star Wars film, which was released in 1977. The lyrics include the lines “Flash Gordon’s left me, he’s gone to the Stars, An evil Darth Vader has me banished to Mars” and “Or are you like a droid, devoid of emotion”. The song features music from Star Wars and Close Encounters of the Third Kind.

A catchy number, also in the Space Disco genre was “Spacer” by Sheila and B.Devotion from France. The song is about a man so charming that he is Out of this World. He could be an Astronaut or even a Starship Trooper, but it’s more likely he’s just a Smooth talker. But despite being a Ladies Man, he’s also a gentlemanly Star Chaser who is there to protect and stand against oppression and put his life on the line. He’s a man she can’t trace but their love will last beyond time and space. Ha! Spacer was written and produced by American group Chic and hit the air waves in 1979 making No.18 in the UK charts.

No point in talking about Space Music without mentioning David Bowie. He had an obsession with Space, writing a string of hits about it. I’ve always thought, out of all the music stars out there, that Bowie had an otherworldly quality, an enigmatic, almost Supernatural presence. He truly was The Star Man. And a genius with music, artistry and theatrics.

He famously said “I always had a repulsive need to be something more than human”. Nina Simone, who met him in the 70’s, admiringly deemed him “not human.” “David ain’t from here,” she said. He also created Ziggy Stardust, a flame haired, extraterrestrial alter ego. And played a Space visitor in the movie “The Man Who Fell to Earth.”

Bowie’s songs demonstrated his interest in science fiction and “Space Oddity” was recorded on June 20, 1969, exactly one month before the Apollo 11 moon landing. “Don’t be afraid of the man in the moon, because it’s only me”, sang 20-year-old Bowie in “Love You Till Tuesday,” his second single from his 1967 debut album entitled David Bowie. Bowie released his final album, Blackstar, 8th January 2016, dying just 2 days later.

“With Showmanship bordering on the Supernatural, Bowie released his final album, Blackstar, on Friday, laden with pointers to his demise, then fulfilled the prophesy of his lyrics by passing away just two days later”.

Daft Punk are a French electronic music duo from Paris formed in 1993.  They were fans of the 1970’s band Space, known for wearing space suits with helmets that hid the performers’ appearance.

The Director and Music Supervisor of Tron Legacy approached Daft Punk and requested that the duo compose the film score for the film. Tron: Legacy is the soundtrack album to the 2010 film of the same name and was the first film score by  Daft Punk. This is my favourite track of theirs, “Get Lucky”.

“Flash” was written by Brian May of British Rock Band Queen for the 1980 Sci-Fi movie “Flash Gordon” based on the Comic Strip of the same name.  It was performed as a duet between Brian May and Freddie Mercury. with harmonies from Roger Taylor.

It was a Top 10 hit in most parts of Europe. Queen composed the soundtrack for the whole film which is now regarded as a Cult Classic.

I will leave you with the infamous “Rocket Man” by Elton John and Bernie Taupin. Rocket Man was released in 1972 and reached No.2 in the UK and No.6 in the USA. It was certified silver in 2016 due to the high sales of digital downloads and Rolling Stone lists it in their 500 Greatest Songs of All Time.

The song was thought to be inspired by the short story “The Rocket Man” in “The Illustrated Man” by Ray Bradbury. It has a similar theme to David Bowie’s Space Oddity and both recordings had the same producer, Gus Dudgeon. It describes the mixed feelings of an Astronaut bound for Mars at having to leave his family in order to do his job.

To celebrate Elton’s 50th anniversary of songwriting with Bernie Taupin, a competition was launched, inviting independent film makers to create videos for 1 of 3 of Elton’s 1970’s songs.  Rocket Man was the winner in the animation category and premiered at the Cannes Film Festival. 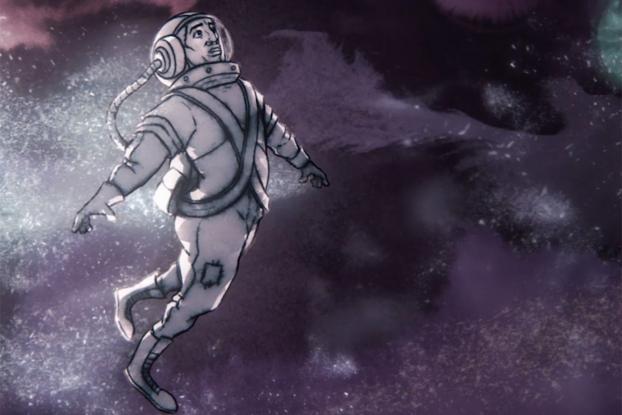 It was created by Iranian refugee Majid Adin and Irish animation director Stephen McNally to tell a story of adventure, loneliness and hope, highlighting the tragic plight facing many refugees today. The animation mixes harsh reality with Space Exploration Fantasy, inspired by Adin’s experiences, in a beautiful piece of Magical Realism.

Hope you enjoyed this little glimpse into Space Music. If anyone has any favourite Space tunes feel free to share. Also interested in finding out more about lesser known hits in the Space Disco genre.

If you liked this you may also like Julia Dream – Dreamboat Queen, Super cool 60s, 70s & 80s sci-fi tv show intros and Orchestral Manouevres in the Dark

(This article is the property of SupernaturalHippie.com – No unauthorised reproduction without prior consent.)