Way back in the 1970’s an Irish Celtic Rock Band came into being in Dublin. “The Horslips” played incredibly good music but perhaps were not well known internationally and as commercially successful as they should have been. Today, however I’d say they’d be regarded as Classic. Right up there with the greats of Rock Music. One of the Greatest Irish Rock Bands ever. Their music is quite simply Passionate and Powerful. The Horslips are now regarded as The Founding Fathers of Celtic Rock.

The Horslips are: Jim Lockhart from Dublin, Eamon Carr from Kells, County Meath, Charles O’Connor from Middlesbrough, England, Barry Devlin from Ardboe, County Tyrone and Johnny Fean from Limerick who replaced original band member Declan Sinnot. They formed in the 1970’s and performed for a decade. Since then they have made a comeback.

What I love about them is that they injected Irish storytelling and mythology into their sound and lyrics and that’s what makes them really special. They had a real Mystical, Psychedelic feel blending Irish traditional music with rock.  They reworked traditional Irish airs, jigs and reels fusing the traditional with Seventies rock. The fit into several Music genres including Folk rock, Progressive rock and Psychedelic rock.

“Horslips” designed their own artwork, wrote sleeve-notes and researched the legends that they made into concept albums. They established their own record label, Oats, and licensed the recordings through Atco, RCA and DJM for release outside Ireland. They kept their base in Ireland, unlike previous Irish bands.” (Wikipedia) 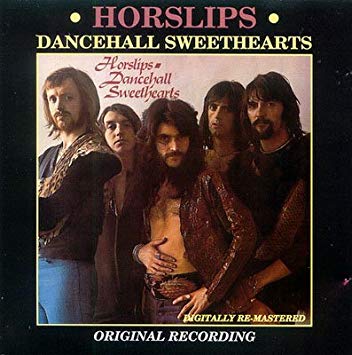 Their name was based on “The Four Horse Men of the Apocalypse” which they changed to “The Four Poxmen of the Horslypse”. Which they then shortened to “The Horslips”.They became official on St Patrick’s Day 1972 releasing their first single “Jonny’s Wedding”. They were a Rock Band before I was even born. But it is the music of this Era which I am drawn to like no other.

They are probably most famous for the feisty up tempo song, “Trouble with a Capital T.”  It was released as a single from their 6th album “The Book of Invasions: A Celtic Symphony”. This was a concept album based on Irish Mythology and Legend and their only Top 40 Album in the United Kingdom.

“Dearg Doom” is a cracking edgy number and WHAT a RIFF! When you hear it I predict you will probably recognise it but can’t place where, when or why.

You will never hear a Fairy Song that sounds like this. Who said Fairies were just for girls! This is The KING of The Fairies. Fairies are taken seriously here in Ireland. 🙂

This post is just to introduce people to this band that may not have heard of the music of “The Horslips” and share some of it with you. I have included some of my favourites. They had copyright issues for 20 years and it was only in March 1999 that they won a court battle for ownership of their own music. and have since released their entire back catalogue with updated artwork and digitally remastered sound. I am interested in music that has soul and heart and that it what you can feel in their music.

I love the music of the 1960’s and 1970’s and what could fall into the anti establishment Hippy subculture. The men looked very different then and free. I loved the long haired men and the fashions of that era. The world has gone a bit conformist now. I also loved how the Horlips dressed in that era, kind of folksy and theatrical at times. It’s really good to watch performers who have a unique style and identity and can also work the stage. They were Earthy and Edgy and I will always like singers that tell a story or sing about mythology. Music that has depth is refreshing no matter what era you are in. I think that’s why so much of the music of the 60’s and 70’s is floating around today. It was quality and therefore timeless. It was not motivated by Commercialism.

The HORSLIPS are well known all over Ireland and will always have a special place in Irish Music History. For more information on this legendary band you can check out their website.

(This post is by SupernaturalHippie.com – Not to be reproduced without prior consent.)