The first computer game I played apart from space invaders was Jetpak on the ZX Spectrum. I loved that. It was very Space Invaderish. Then there was Manic Miner. A very cool game.

Then I evolved to a Nintendo 64 and got some cool games for that including Super Ghouls and Ghosts.

I played some of the same computer games as my younger brother and read some of the same comics and books as him. He introduced me to the cult classic “Scream”! What a great comic that was. He also introduced me to the books of Christopher Pike which were amazing. Then I went to Uni and lived in different cities and I don’t know where the time went!

I got back into computer games for the PC over a decade ago. And I LOVED McGee’s Alice. I also really liked Prince of Persia. After all of these I got out of the way of computer games. They kept getting updated every year and more and more expensive. And you needed to keep updating to different consoles or whatever. I wasn’t interested in overtly violent or sexual or war or strategy games. Just games where you could go into these little mystical fantasy worlds.

I did like Streetfighter too. I used to play that in a Sports Cafe Bar where they had games in booths where you could eat, have a drink and street fight! There was a game in the 90’s I kept meaning to get also, as I kept seeing it advertised called “Magic Carpet”.

If anyone can recommend any magical, fantastical or spooky games of a similar ilk I’d love to hear about them. 🙂 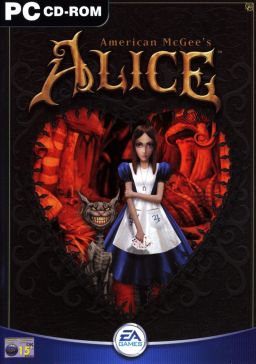 I am totally out of the loop with computer games and which systems to use and not sure if you can still get any for PC. But I am sure there is some absolutely amazing games out there now…

(This post is by Anne-Marie at SupernaturalHippie.com. No unauthorised reproduction without prior consent.)