One of my favourite Vampire films was the Hammer Horror Classic, Dracula A.D. 1972. I was a big lover of the Hammer Horror genre and I grew up with it. I loved Hammer Horror as it was very atmospheric and kind of glamorous. I am not a fan of extreme, excessive, guts and gore and I find a lot of modern day horror and indeed fantasy hard to stomach in that respect. 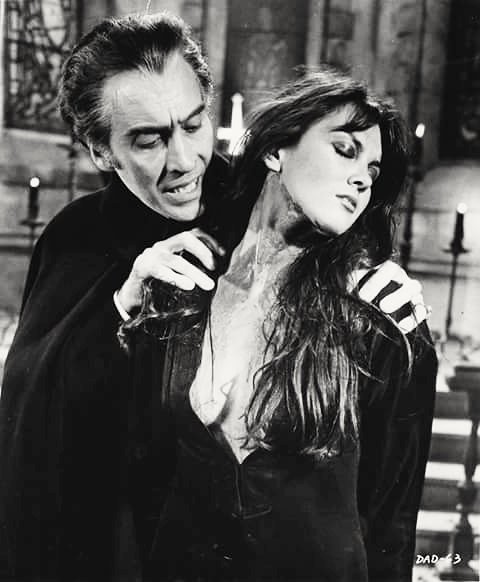 I am more into Supernatural Horror that had a dramatic, at times, romantic, atmospheric quality. Moonlight, Castles and horse drawn carriages. A lot of Hammer Horror was like that. This one was a bit more modern which made it stand out from their previous movies. But it still had that unique Hammer quality. 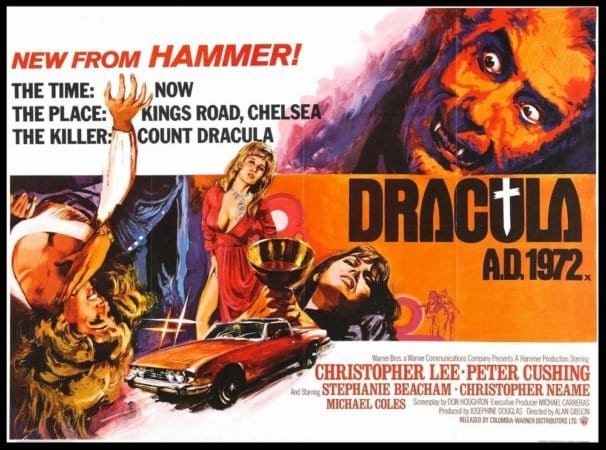 Dracula A.D. 1972 had a really impressive cast including Peter Cushing, Christopher Lee and Stephanie Beacham. My favourite character was Caroline Munro who played Laura Bellows. She was perfect for Hammer Horror and had such an enchanting, beautiful look and amazing long dark glossy hair. She reminded me of my favourite comic book character, Misty.

While most Hammer films before this were set back in time, this movie had an upbeat, contemporary feel which was kinda cool. It was actually released in 1972 and had a real Hippy vibe. It opens in 1872 with Dracula and Vampire Hunter, Van Helsing battling on top of a stage coach with both appearing to suffer mortal wounds. It then moves us a century forward to 1972 Swinging London where a group of hippies including Van Helsing’s grand daughter, an Occult expert, played by Stephanie Beacham start dabbling in the macabre.

I am not going to go into the whole plot but I really liked this movie. It’s the most Hippyish Dracula movie I have seen. I liked the band in this film. There was some cool music played by a really hippy looking group called Stoneground performing “Alligator Man”. 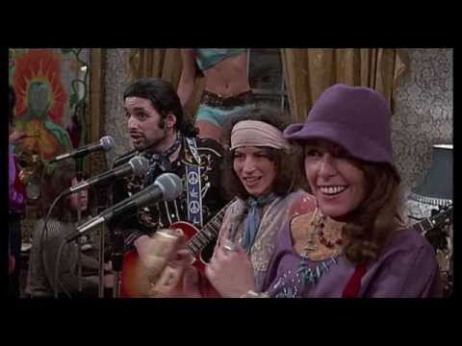 Stoneground were a Californian group formed in San Francisco in 1970. They also featured in another Warner Brothers movie called “Medicine Ball Caravan”. Will leave you with “Alligator Man”.


Perfect Horror for a Supernatural Hippie 🙂

Dracula A.D. 1972 has to be one of the funkiest Dracula’s ever. The perfect film for a Supernatural Hippie. 😉 Hee hee. If you’re a Horror fan.