“The Devil went down to Georgia” is a cracking little number! It tells the story of a guy called Johnny doing a duel with the devil. It falls into the category of Country Rock or uptempo Bluegrass.

The song begins with a forlorn Devil arriving in Georgia disappointed as he has stolen far fewer souls than expected. He comes upon a young man playing the fiddle called Johnny who is a pretty damn fine musician. As the devil needs more souls and is also, consequently, a fiddle player, he challenges Johnny to a contest. He offers to give Johnny a golden fiddle if he plays better or take his soul if he loses.

Although Johnny thinks it might be a sin to take the devils bet, he puts his soul on the line because he is confident he is “the best there’s ever been”. He was right and as the song plays out the devil loses.

The Devil went down to Georgia was written and performed by the Charlie Daniels Band and released in 1979 on their album “Million Mile Reflections.” Vassar Clements, an American Jazz, Swing and Bluegrass fiddle player wrote the original melody in a tune called “Lonesome Fiddle Blues.” The Charlie Daniels band later put lyrics to it and the verses are spoken rather than sung. (Recitation) It was their biggest hit and featured in the 1980 film “Urban Cowboy”.

The Devil went down to Georgia – Charlie Daniels – Song Lyrics

When he came across this young man
Sawin’ on a fiddle and playin’ it hot
And the devil jumped
Up on a hickory stump
And said, “boy, let me tell you what

I guess you didn’t know it
But I’m a fiddle player too
And if you’d care to take a dare, I’ll make a bet with you

Now you play a pretty good fiddle, boy
But give the devil his due
I’ll bet a fiddle of gold
Against your soul
‘Cause I think I’m better than you.”

The boy said, “my name’s Johnny
And it might be a sin
But I’ll take your bet
And you’re gonna regret
‘Cause I’m the best there’s ever been.”

Johnny, rosin up your bow and play your fiddle hard
‘Cause hell’s broke loose in Georgia, and the devil deals the cards
And if you win, you get this shiny fiddle made of gold
But if you lose, the devil gets your soul

The devil opened up his case
And he said, “I’ll start this show.”
And fire flew from his fingertips
As he rosined up his bow

When the devil finished
Johnny said, “well, you’re pretty good, old son
But sit down in that chair right there
I’m gonna show you how it’s done.”

Fire on the Mountain run boys, run
The devil’s in the House of the Rising Sun
Chicken in a bread pan pickin’ out dough
Granny, does your dog bite? No child, no

Johnny said, “Devil, just come on back
If you ever want to try again
I done told you once you son of a bitch
I’m the best that’s ever been.”

Fire on the Mountain run boys, run
The devil’s in the House of the Rising Sun
Chicken in a bread pan pickin’ out dough
Granny, does your dog bite? No child, no

There is a part two. It’s the sequel, “The Devil comes back to Georgia” released in 1993 and featuring guest performances by Travis Tritt as The Devil, Marty Stuart as Johnny and Johnny Cash as the narrator. 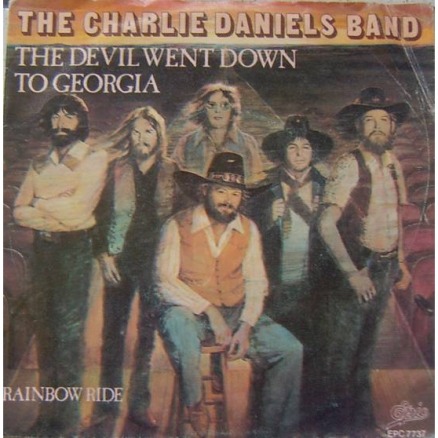 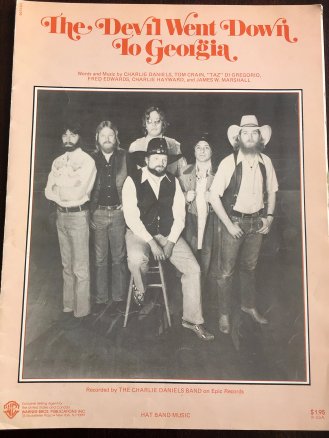