Number 13 and The Ogham Stone in Carlingford, Ireland

So I recently spotted the NUMBER 13 in October in Carlingford in relation to the Carlingford Ogham Stone and time being measured in lunar cycles of 13 Moons…. This was VERY interesting as I have been to Carlingford before but this time I was drawn to the Ogham Stone. Ogham was the earliest form of writing in Ireland. It is sometimes called the Celtic Tree Alphabet.

“Ogham is the earliest form of writing in Ireland, it dates to around 4th century A.D. and was in use for around 500 years. The Ogham alphabet is made up of a series of strokes along or across a line. Ogham is sometimes referred to as the “Celtic Tree Alphabet” as a number of the letters are linked to old Irish names for certain trees. The alphabet was carved on standing stones to commemorate someone, using the edge of the stone as the centre line. They normally read from the left hand side bottom up, across the top and if need be down the other side.”

It is fascinating to read what is written here on this stone. The symbols written were related to trees and also show qualities associated. Here is what it says on the stone.

“Ogham is the Ancient language of Communication. The letters represent symbolic meaning of People, Earth and Trees. This symbolic language of Communication carries and shares wisdom from our Ancient People. It is part of the Duchas, the innate Knowing of the Earth and it’s people. Our Ancestors measured time in Lunar Cycles of 13 Moons over a lunar year, beginning on the 1st of November and ending on the 31st of October”.

Fascinating…. Also here you will see the word…. “QUINTESSENCE”. What a beautiful word. It is so soft and has a beautiful effect on the tongue. It means literally, the “fifth essence”, the most essential feature, purest form, or most typical example of something, The fifth and highest element in ancient and medieval philosophy that permeates all nature and is the substance composing the celestial bodies. The essence of a thing in its purest and most concentrated form.

On the Carlingford Oghams Stone it states; “Quintessence is The Fifth Element which is beyond the physical world, the others being Earth, Air, Fire and Water. It is intangible, indestructible, untouchable, permeating All Time and Space”.

Wow! Just take that in…. That is ONE interesting STONE.

“The Ogham script consists of twenty-five simple strokes centred on or branching off a central line. It is similar in purpose, but separate in origin from the Nordic runes. The Ogham characters were inscribed on stones or written on staves of wood. As a method of writing it is laborious, but as a language of symbolism it is powerful.” http://www.ancient-wisdom.com/treelore.htm

And I have to confess I know very little about all of this. I also find it hard to research these areas on the internet as I rarely find what I am looking for. I would love to attend a Mystery School or find places where I can learn about the things that interest me. I am always on the lookout. Especially in Ireland, I want to find affordable courses, retreats, talks about this type of stuff.

Anyway, on the subject of trees, I think it is very, very sad the vast levels of deforestation we are witnessing on out planet in the name of profit. As our Trees are the lungs of the Earth and they are so critical to life on earth for each and every one of us. Destroying trees for profit, greed and technology is not good. I believe people do not know much about trees and the life of trees.

As you travel through life you realise how little you know and how much there is to learn and how little we know of our past. As I get older I realise what some people refer to as “New Age” is actually wisdom from ancient civilisations that is relevant today. You could in fact call it “Old Age”!

I believe ancient civilisations were much more in tune with nature and that in the modern world a lot of us have become disconnected from it. Instead of looking up to the stars and the moon, walking in forests and watching the waves crash, following our passions or trusting our intuition, heads are down looking at phones, people sit in offices and relaxation is more watching more media and comfort eating. This might work for some but I think it’s incredibly healthy for people to experience nature and wildness as it has it has a deep spirituality.

Anyway, back to the Number 13. I spotted it again in November in Transylvania. I was in Sighisoara’s Old Town, a beautiful Medieval Citadel and UNESCO World Heritage site. Also, the supposed birthplace of Vlad Dracul or Vlad Tepes. As well as that door there was a lot of other interesting things to see. I am going to write about that when I get organised but if you are interested, here are some of my photos of Transylvania.. It’s cool to see a Number Thirteen Door like that. Maybe one day I will go back there and walk through that door and stay there for the night!

Anyway FRIDAY the 13th! What’s the good in it and why is it maybe not as bad as we think? Some interesting facts about Friday, Thirteen and Friday the 13th.

1.THIRTEEN is a very FEMININE number. It is the average amount of menstrual periods a female will have in a year. In Ancient times and before Patriarchy there was an awareness of divine female spirituality and recognition of the significance of women’s cycles. At menstruation she was thought to be at her most divine, intuitive, psychic and magical and also free of the male gaze and in a sacred space where she could nurture herself. She was thought to be at the absolute height of her power during ovulation. “The word “menstruation” is etymologically related to “moon”. The terms “menstruation” and “menses” are derived from the Latin mensis (month), which in turn relates to the Greek mene (moon) and to the roots of the English words month and moon.” (Wikipedia)

2.There are generally 13 Cycles of The MOON in a year

3.In WICCA, covens often have 13 participants

4.In Ancient EGYPT they believed that life has 13 STAGES. The final stage 13 – heralds the journey to the Afterlife.

5.Ancient Pagan traditions also viewed life as having 13 stages and the afterlife not something to be feared

8.For Wiccans, Friday the 13th is not an unlucky day, but quite the opposite

9.Friday comes from Freya a Goddess of Love, Fertility and Beauty but with a dark side, in Norse Mythology with 2 cats, a gift from Thor, the God of Thunder.

10.When new patriarchal religions came, old traditions were associated with bad things and paganism was viewed as a threat and demonised, as were strong women and goddesses, hence witchcraft trials etc. Black cats got it bad too.

11.In the Roman calendar, Friday was devoted to Venus, the Goddess of Love

12.There are 13 months in the Pagan Lunar Calendar which corresponds to the female menstrual cycle. Native American cultures also tracked the calendar by Moons.

13.In Numerology 13 is a Master number that helps us manifest desires and also an angel number

Have a Nice Day

Should we be scared of Friday the 13th? Maybe that is one viewpoint if you are superstitious. There are historical reasons people have come to fear this combination. But equally there are reasons people like this day. Perhaps we should welcome Friday the 13th as she might in fact be LADY LUCK! This Friday the 13th is very close to the FULL MOON incidentally. Like the last one!

If you are one of those people that likes Friday the 13th and treats it like a holiday or a night you want to party maybe there’s a deeper reason why… Have a great day whether you are out in nature, out on the town, stuck at work or hiding away!

Here’s a Beautiful Black Cat that crossed my path in Brasov, Transylvania. 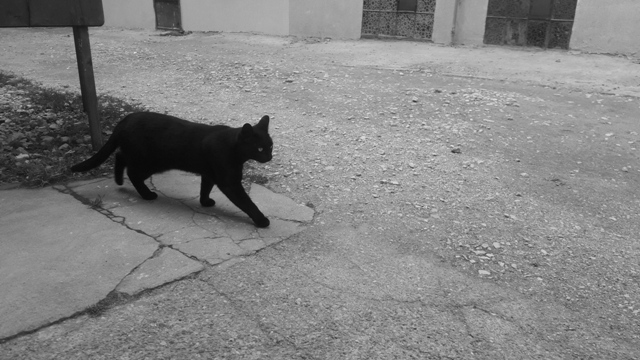 Friday the 13th – Unlucky for Some
For Others – A day to go out and have Fun!

Friday is also known as Venus Day. Friday the 13th used to be The Day of The Goddess…

PS: This was a late night post. I can’t sleep on FULL MOONS… December 12th 2019 was the December Full COLD Moon. It’s also known as the MOON before YULE. 🙂 It is the MOON closest to the Winter Solstice which is the Longest Night of the Year.

7 thoughts on “Another Take on Friday the 13th… Could it be LUCKY for some? 13 Cool Facts about Friday the 13th! Also, a 13 Moons Ogham Stone in Ireland and a No.13 Door in Transylvania…”