I love music and sometimes I hear songs in shops walking about that I love or that I had forgotten about or that I newly discover. Yesterday in Flying Tiger I heard this one. It’s “Valleri” by The Monkees. The Monkees were an American Rock and Pop Band that were big in the late 60’s to early 70’s and had a popular TV Show.

The Monkees were described as… “initially being “a TV show about an imaginary band… that wanted to be the Beatles that was never successful. Ironically, the success of the show led to the actor-musicians becoming one of the most successful bands of the 1960s. The Monkees have sold more than 75 million records worldwide making them one of the biggest selling groups of all time with international hits, including “Last Train to Clarksville”, “Pleasant Valley Sunday”, “Daydream Believer”, and “I’m a Believer”.  (Wikipedia)

Can’t remember Valleri as much as their other songs

Love this song, “Valleri”. It’s not the most famous of their songs. At least if it was I can’t remember it like I do the others. It was probably bigger in the USA. Though it was before my time. I am familiar with a lot of their other songs though. This song wasn’t instantly familiar to me but I think I had heard it before.

This song was floating about before I was born and made Number 3 in the Billboard Charts in the USA. It was released in 1968 and falls into the genre of Psychedelic Rock. My favourite genre. 🙂 It was their last Top Ten record.

Composed by the same people that wrote “Last Train to Clarksville”

Valleri was written by Tommy Boyce and Bobby Hart for The Monkees. They also composed “Last Train to Clarksville”. Apparently Valleri was the name of a girl that Bobby Hart had a crush on at high school.

The B side was “Tapioca Tundra”. Definitely never heard this one. The surreally titled song was apparently about a performer realising the songs he writes belong to the fans, the crowds, the people. Band member Micheal Nesmith, who wrote it was a poet and one of the ways he got into songwriting was writing poems and seeing if he could put them to music.

The Birds, The Bees and The Monkees

Valleri was a single from The Monkees 5th Studio Album, “The Birds, The Bees and The Monkees”. This album reached 3 on the US charts but the album failed to chart in the UK despite their previous albums reaching The Top Ten. It sold over a million copies.

“There’s a girl I know who makes me feel so good
And I wouldn’t live without her, even if I could
They call her Valleri
I love my Valleri” 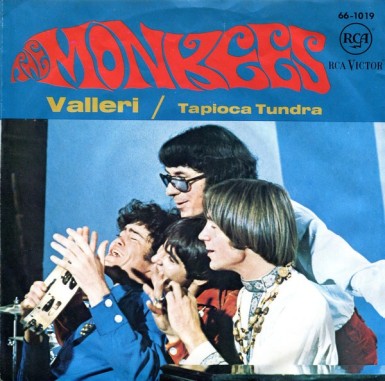