No Motorcycle Helmet needed – This one’s a Wild one

Just look at the way his hair blows in the wind. What an Action Man. What a Motorbike. I used to love watching RENEGADE when it was on TV. But I never actually watched the whole thing in order from start to finish. I wanted to buy it but can’t seem to get the box set to watch in a European Region Dvd.

One Man and His Bike

RENEGADE was a 1990’s American Television show that ran from 1992 until 1997. 1990’s and it already feels totally RETRO. It ran for 5 seasons and starred Heart-throb Lorenzo Lamas as Reno Raines, a Renegade on the Run. A former San Diego Police Officer who exposed corruption and then was framed for crimes he didn’t commit. On the road he joins forces with a Native American Indian Bounty Hunter called Bobby Sixkiller played by Branscombe Richmond.

Wow that boy had some moves! Fun to watch. Nobody’s gonna mess with him. 😉 He’s got your back. Ha! What a mega hunk. He is one fit kick boxing cookie. The Star Actor Lorenzo Lamas saw Renegade as an opportunity to utilise his Martial Arts capabilities and Motorcycling skills in an acting role.

The series was created by Stephen J Cannell and Lorenzo convinced him to let his then wife, Kathleen Kinmont star in a role alongside him as Cheyenne Phillips so that they could be together and a separation wouldn’t ruin their marriage. She plays the sister of Bobby Sixfinger and the girl that pines for him. Cannell played the recurring role of the crooked police officer Donald Dutch Dixon. 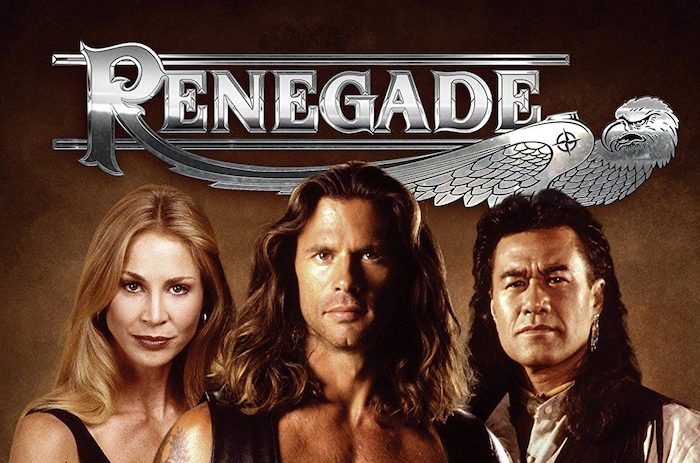 Filmed in California with various bikes including one for Glamour Shots

The show was mostly filmed in San Diego, California and a number of motorbikes were used. One special shiny bike was kept for “Glamour Shots”. 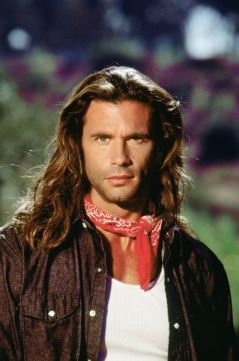 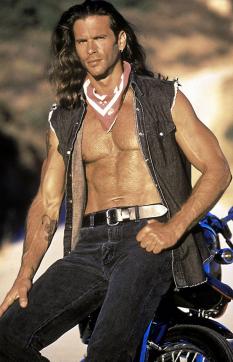 Can you buy this anywhere?

So this is what I want. RENEGADE Seasons 1-5 to watch in European region. But alas I cannot find. Would be great if NETFLIX added more old and retro titles. 🙂 Or somebody created a RETRO streaming service. Think you can get this Box Set in the USA though. .

Can you remember RENEGADE? It’s hard to forget..

“He was a cop, and good at his job, but he committed the ultimate sin—and testified against other cops gone bad. Cops that tried to kill him, but got the woman he loved instead. Framed for murder, now he prowls the badlands…an outlaw hunting outlaws…a bounty hunter…a RENEGADE…”