“Porque te Vas”, Spanish for “Because you are leaving” was a hit single for Spanish singer Jeanette in the 1970’s. It was released in 1974 and was a hit single in Spain, Europe and internationally. It was a Love Song about the pain of parting. Sweet, innocent and Sultry.

Jeanette Anne Dimech was actually born in London, then moved to America and grew up in Chicago and California, moving to Spain aged 12. Her father was from Malta and her mother of Spanish descent, originally from the Canary Islands. On arrival in Barcelona she only spoke English but some local school children helped her learn the lingo. In the course of her career she sung songs mostly in Spanish. And what a beautiful language and what a beautiful voice. She has been described as a Legend of Spanish Music.

Influenced by Dylan, Donovan and The Byrds

During the 1960s Jeanette learned to play guitar and started to write her own songs and joined a student band called Pik-Nic which didn’t work out. She moved to Vienna with her Hungarian Footballer husband to set up home and mother her child, then returned to Spain in 1971 to start a Solo career. She is said to have been influenced by American Folk music, and her idols included Bob Dylan, Donovan, and the Byrds.

Her most famous song

Porque te vas was her biggest success and the song she is most known for. It was written by José Luis Perales and it became an international hit when it was used in an award winning film in 1976. The film was Cría Cuervos (Raise Ravens) directed by Carlos Saura.

The song reached Number 13 in Austria, Number 4 in Switzerland and Number 4 in Germany. It was also popular in Poland and hugely popular in Russia and often still heard on Retro FM, a Russian radio station. Before being in the movie the song was fairly successful in SPAIN but after the movie it’s success was huge.

“In 1979, Madrilenian newspaper ABC wrote that, “never a Spanish song, and sung in our language, had achieved such popularity levels on both sides of the Atlantic.” (Wikipedia) 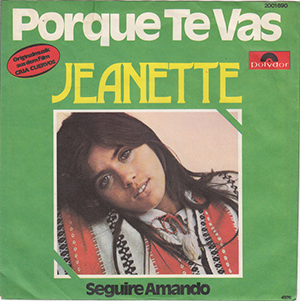 Porque te Vas is one of the most famous songs in Spanish Pop History and is now regarded as a Cult Classic. It was ranked Number 43 in Rolling Stone’s Magazine’s List of the 200 Best Songs of Spanish Pop-Rock in 2006.