Many years ago I went to a Beatles Art Exhibition. This was my favourite image. John Lennon lying in the bath dressed casual with a glass of red wine. Very cool.

Photos from a Beatles Art Exhibition

I like going to ART Exhibitions. And I like taking photos. These are some pics that are from an art exhibition of The Beatles I went to see over seven years ago. Wow how time flies!

The Illustrated Beatles featured 42 artworks inspired by 42 classic songs by The Beatles. It was curated by Peter Donnelly. The song list was compiled by Irish creatives, broadcasters and writers and some of Irelands leading and award winning illustrators were invited to give a response to the song title through the medium of illustration.

The song list for the show was chosen by creatives, writers, broadcasters and film makers working in Dublin and then subsequently handed over to the illustrators. The work produced a stunning range in various mediums such as acrylic, digital, watercolour, scaperboard, collage and stitch-work, all beautifully presented in album cover format. 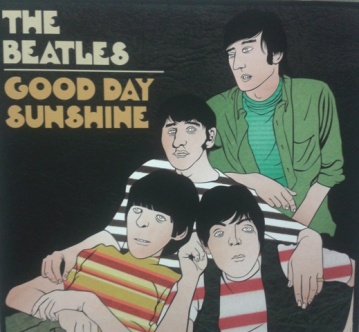 Ringo sitting on a Fence

Concept was inspired by “The Beatles Illustrated Lyrics” by Alan Aldridge

The concept for the show was inspired by Alan Aldridge’s book, “The Beatles Illustrated Lyrics”. Released in the late 1960’s the book remains a time capsule of Psychedelic Art from photographers, painters and illustrators from the period.

Here is the book that inspired the exhibition…

Maybe you have been to a cool Beatles Art Exhibition. 🙂

One thought on “A Beatles Art Exhibtion in Ireland”