“Up the airy mountain
Down the rushy glen
We daren’t go a-hunting
For fear of little men
Wee folk, good folk
Trooping all together
Green jacket, red cap
And white owl’s feather”

Happy Saint Patrick’s Day on this ominous Apocalyptic time in history. Is this the first Saint Patrick’s Day where Parades all across the world are cancelled? And all the bars are closed? Eeerie! However it has been lashing with rain all day and cold weather.

Leprechauns I find a little bit freaky! I love Celtic Mythology and Fairy lore but Leprechauns are a completely different ball game. They are mischevious and a little bit scary. A bit of a Trickster element there. I tend to avoid them! They are a bit scary. I asked my female friends what they thought about them and they all said they tried not to think about them. And that they didn’t get a good vibe about them. I discovered an Underground Fairy and Leprechaun Cavern in Carlingford several years ago. I picked up a little ornament there too but I gave him away. 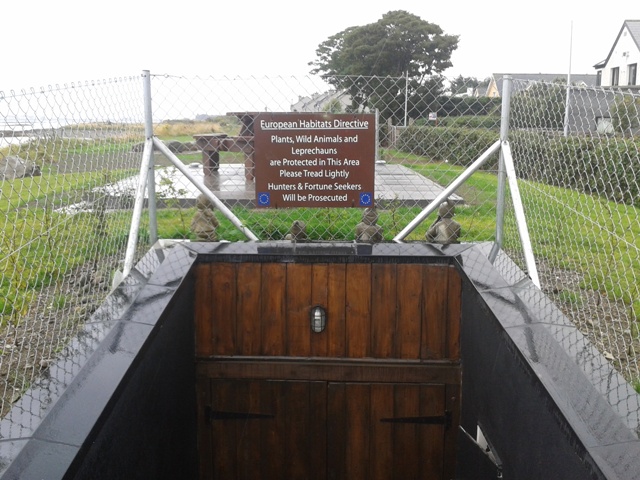 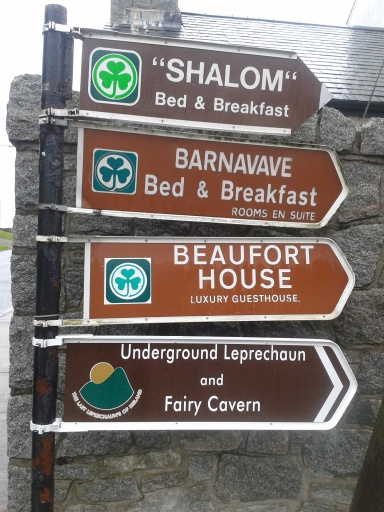 My slight discomfort with Leprechauns does not stop people giving me Leprechaun Books. Such as this one from an Irish ex boyfriend that grew up on a farm. Why he got me this I do not know. I have not properly looked at this. But I still have it. He also got me a Mystical Beast book which sounds good and mystical in theory except for the fact it was slightly ominous and both of us, after browsing through it, decided to get rid of it as it was a bit over our heads and a little bit dark. 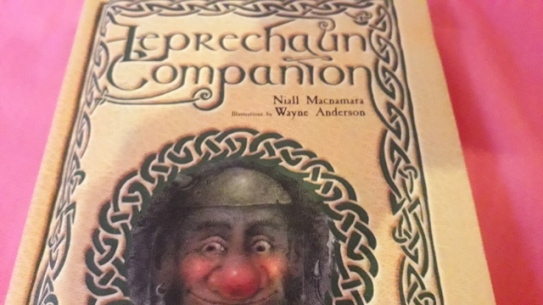 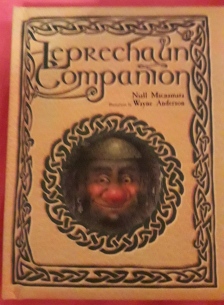 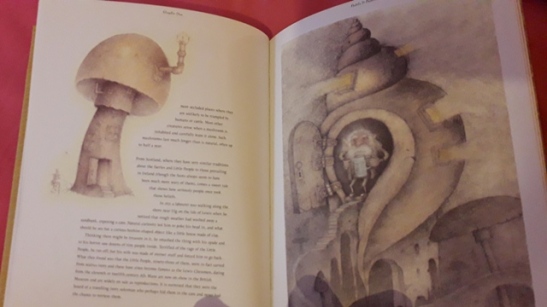 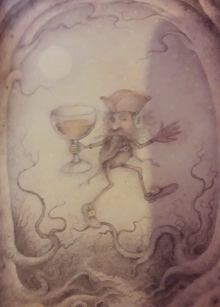 Anyway I still have my Leprechaun book for years now and it always ends up in a box for charity but it never actually goes. So maybe I am meant to read it. I don’t know why but I am very uncomfortable with Leprechauns. So I’m not sure if I can go there. They just send a shiver down my spine. That whole rainbow pot of gold thing isn’t really where they’re at. That’s surface level Leprechaun. And at the end of the day no-one has ever got to the other side of the rainbow or got a pot of gold. But they are associated with Lucky Charms… So maybe they are lucky for some! If you know how to work with them.

An older lady I used to work with who was clearing her house out decided to give me some Leprechaun books too. Again I have not really looked into these as I don’t really want to immerse myself in the Land of the Leprechaun. I think she gives me anything magical, fairytale like, mystical, horror, health, vegetarian or self help that she has knocking about!  Which is generally good. But the Leprechauns don’t call to me the way other mythologies do.

Until you delve deeper…

Leprechauns viewed alone can create a vibe of merriment, mischief or even of creepiness and fear. They are solitary males, small in height, that have a hermit like existence that arouses suspicion. They are tricksters tempting people with material riches far away on the other side of the rainbow. They are not feminine and spritely, small and delicate like the fairies and they did not share the beauty and the tragedy of the mermaids. They were not handsome princes so their power came from being crafty. From offering false riches. They play jokes. But they are in fact a part of a whole fairy kingdom.

They were in fact the Shoemakers for the fairies. The name Leprechaun is probably derived from the Irish Gaelic words “Leith Bhrogan” meaning The One Shoe Maker or Maker of One Shoe. They are a strange fit though and only appeared in later mythology.

“The Leprechaun makes shoes continuously and has grown very rich. Many treasure-crocks, buried of old in war-time, has he now for his own”. (William Butler Yeats) 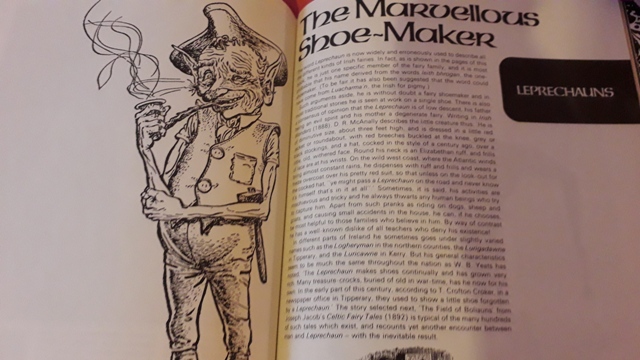 On browsing through these books they were rather delightful. One had lots of mythology, stories and legends in it including that of fairies and mermaids. And even Dracula himself made an appearance. 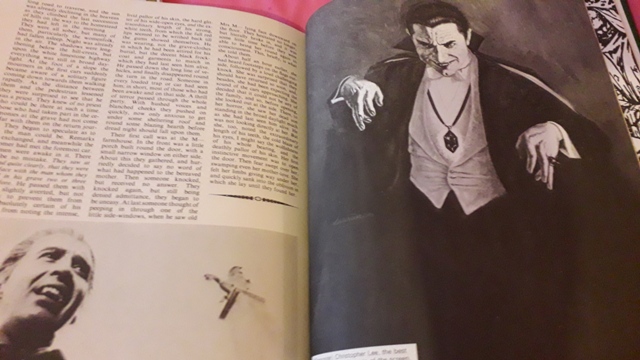 In saying that I DO want to visit The National Leprechaun Museum. As it seems to celebrate the lighter side of Leprechauns. And includes other magical beings. I first learnt about it while working in a college library. a few years ago. I opened up a newspaper on my break. I think it was The Irish Times and there was an article about a new National Leprechaun Museum that had opened in Dublin and it looked really cool and I thought right I am going there. But I still haven’t been yet! 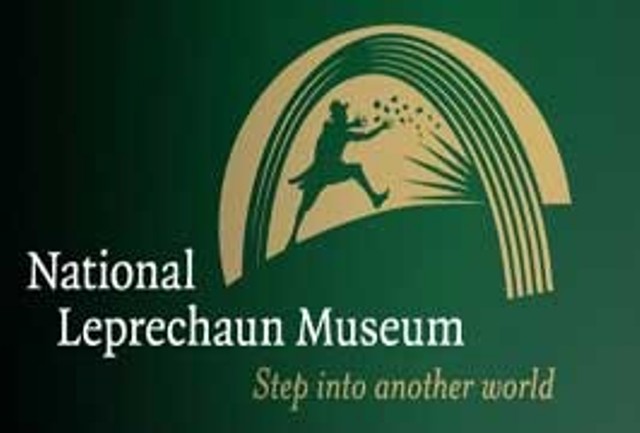 Anyway much as I don’t collect Leprechaun things they do make their way to me. And Leprechauns are here to stay. And they seem to be associated with Saint Patrick’s Day.

Generally people view fairies as good, witches as bad, mermaids as beautiful and tragic or as seductive sirens luring sea men to a premature death. Leprechauns are generally viewed as cheery fools or tricksters or in fact the opposite, as good luck. Just like the human kingdom, the realm of magical creatures has good and bad. The Leprechaun is Native to Ireland and no doubt has a lot more depth than we give him credit for. 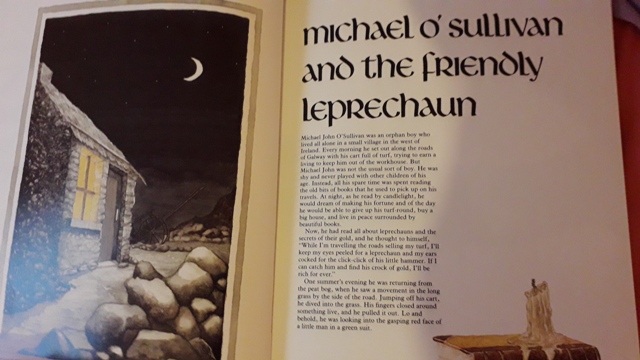 My thoughts now are that I will read up on these mythological beings. As, while there may be tricksters amongst them, there may also be wise old men. Don’t they say Magic exists for those who believe. A Leprechaun could offer you fools gold but could also be a lucky charm if you know how to play the game and learn valuable lessons. There is also that side to them where they could be fed up of humans and learned to adapt and their solitary ways have made them become objects of suspicion that may not always be warranted. There is also that element that they are hard workers that want to protect their own riches and not be exploited by humans.

What I think essentially is missing in the modern representation of the Leprechaun in popular culture is the mysticism and mythology. It is portrayed as a rather one dimensional character with a childish feel. Yet this creature is no child. But to represent him in this way sugar coats the darkness of old folk tales. Darkness that existed as there has always been darkness in the world and to shed a light on it prepares one to it’s existence. He is also represented completely separate from that mystical world he was part of and he was very much a spirit of the earth whereas now he is commercialised.

This Saint Patrick’s Day, the streets of Ireland lie deserted, the rain pours down, the festivities have been cancelled, the bars are closed, the tourism industry and all businesses have taken a major hit. Merriment levels are low.

What would Saint Patrick make of this? What would a  Leprechaun do? In Apocalyptic times some turn to prayer, some turn to magic, some lose themselves in fantasy, some panic and others try to simply plod along, while others are imaginative and create new opportunities in the midst of mayhem. Maybe, like Saint Patrick, being off grid in the mountains is the best place to be in dark times. Out in the countryside or down by the coast. Away from the chaos of modern cities. A Leprechaun’s home was often thought to be underground.

There are Tricksters that can create chaos and profit from it leading people on a merry dance. They know how to hoodwink and have the last laugh while mere mortals are left bemused. There are also  Leprechauns that are the sort of clever characters that could turn chaos to their advantage. And I am sure many will…. For the Leprechaun always has a Pot of Gold and always sees a Rainbow and always has a few tricks up his sleeves… Keep your wits about you when all around people are losing theirs. There’s a fine line between fantasy and reality. One thing about Leprechauns is they’re resourceful. 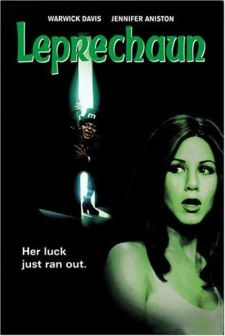 “Ireland must surely be the very home of the supernatural. For is it not a country where the gloom of day can make way suddenly for the bloodshot splendour of sunset?… The Irish people, too, are quite unlike any other race. Surely no one else has such a keen appreciation of the supernatural, or is so aware that there is much in ordinary life no ordinary logic can explain…” Peter Haining, The Leprechaun’s Kingdom

(This post is by Anne-Marie at SupernaturalHippie.com – No unauthorised reproduction without prior consent.)

11 thoughts on “Happy Saint Patrick’s Day! – And watch out for Leprechauns…”