(This Poem is by Anne-Marie at SupernaturalHippie.com – No unauthorised reproduction of poem without prior consent.)

So here is the first illustration of Pixie’s Magical Teapot from Sandy in the USA who has a blog called Zongs of Zamzara – Drunk Lotus Blog. Thanks Sandy. 🙂 I really loved this. It’s a really unique style, kind of a mixture of cubism and surrealism. But it doesn’t exactly fit a category which is why I like it. It conjures up opulence and a sense of the exotic.

I love the swirls and the little touch of gold and the movement. Interesting that the teapot is sitting on a carpet as after I wrote this poem, I immediately had another character and story (or poem) in mind regarding a Magic Carpet. Sandy also did a Pink version of this. Sweet. 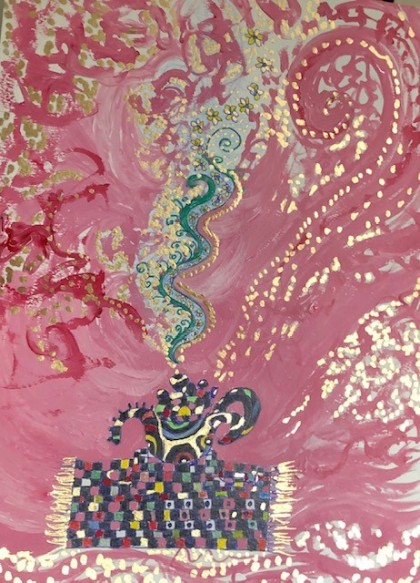