Stand and Deliver…….Your Money or your Life….

With a powerful introduction like this, you must read on…. The Highwayman (by Alfred Noyes) tells a Tragic Tale of Doomed Love in beautifully descriptive and poetic language.

This must be one of my all-time favourite poems, a Timeless, Haunting, Romantic Masterpiece evoking strong imagery and passion.

Dark and Moody, with a rhythm similar to that of horses hooves, there’s a galloping beat that’s perfect for capturing the ambience of the Masked Figure on Horseback.

The Highwayman is deadly and he dares to be different, galloping on the fringes of society and remaining Outside of the Establishment.

He’s undoubtedly handsome and an incredibly well dressed, stylish and passionate individual. A proud and brave man who’s in love with Bess, the Landlords Daughter and she with him.

“He whistled a tune to the window, and who should be waiting there
But the landlord’s black-eyed daughter
Bess, the landlord’s daughter
Plaiting a dark red love-knot into her long black hair” 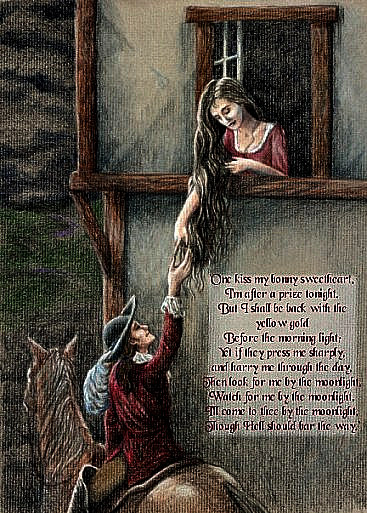 He rides in the night, alone, fearless and confident. Unlike some modern day criminals The Highwayman was generally a well dressed, well spoken gentleman who used Threats rather than Violence.

But he is no match for cowardly troops, ignorant and with no respect for life, guns at the ready. Even Bess is not safe with them around and we feel her helplessness, despair and sorrow, ultimately ending in sacrifice. No happy ending here but instead lingering Ghosts.

This is a cold poem beginning on a winters night, a Tragic Tale of unrequited love, yet with the faint glimmer of hope of an afterlife in the form of the Ghostly ending.

The colours evoked in the poem are generally black and grey with splashes of various shades of red, such as the “purple” moor, a coat of the “claret velvet”, a “dark red” love knot, etc… warm colours. And there is often mention of Blood.

The colours reflect the mood and what is to come, despair, death and blood spill. And the troops are dressed in red. The Moon is mentioned a lot, representing the light in the poem and adding a Mystical element. The Highwayman is very much a creature of the night.

The book above is an illustrated version of the story from Oxford University Press and The Highwayman is a poem that certainly deserves to be in a book all by itself as in my opinion it is one of the best ever written. The illustrations are in black and white which is well suited to the mood of the poem.

The artwork by Charles Keeping is good but doesn’t match that which can be conjured up in your imagination which just cannot be put onto paper. I imagined a beautiful Bess and a devastatingly, dangerously handsome highway man, but apart from that the illustrations seem quite reminiscent of the imagery evoked by the poem and reflect the story well. Charles Keeping’s illustrations won this book the Kate Greenaway Medal in 1982. It’s a beautiful book.

The Highwayman belongs to the genre of Narrative Poety, that which tells a story. This one was set in 18th Century rural England telling the story of a Highwayman in love with Bess, the landlord’s daughter, but betrayed to the authorities by a jealous Stableman. (The Trickster element.) The Highwayman escapes ambush as Bess sacrifices her life to warn him. His futile attempt at revenge ends only in a tragic Death.

The Highwayman was first published in 1906 for a magazine based in Edinburgh, Scotland. A young Alfred Noyes, 24 at the time, was inspired by wild weather conditions while staying in a room at a cottage in a desolate area of countryside in England. “The Highwayman suggested itself to me one blustery night when the sound of the wind in the pines gave me the first line.” The poem was completed in about two days.

This poem Romanticises the notion of The Highwayman and we see the demise of a Tragic Hero. As Highwaymen are generally thought of as being intelligent and quick witted, this poem stirs the emotions as he is unable to outwit the troops and also unable to save the girl he loves.

So the Hero takes a Fall, literally falling off his horse as he is shot down “like a dog on the highway” and it’s very sad, you almost feel his humiliation and degradation and want a more noble Death for him.

However this Poem will forever live on, standing the test of time and capturing the essence of The Highwayman and of an era long gone…

Music in top video is “The Highwayman” by Canadian Celtic Musician Loreena Mc Kennitt and the video footage is from Fleetwood Mac. Music above is from Singer Songwriter Karliene’s version of The Highwayman.

Highwayman Artwork and Illustration at very top of feature and displayed below is by Abigail Larson, a Gothic and Fantasy Illustrator and Artist. I absolutely love her portrayal of The Highwayman and Bess. She has currently finished working on “The Dark Wood Tarot” for Llewellyn Worldwide,

I will leave you with the famous timeless song “The Highwayman” by American singer Jimmy Webb The song came to him vividly in a dream one night where he felt he had almost actually lived the life of a Highwayman. It’s a song about Reincarnation. He released it in 1977, it was subsequently released by several others and led to the formation of a Country and Western Super Group known as “The Highwaymen”. 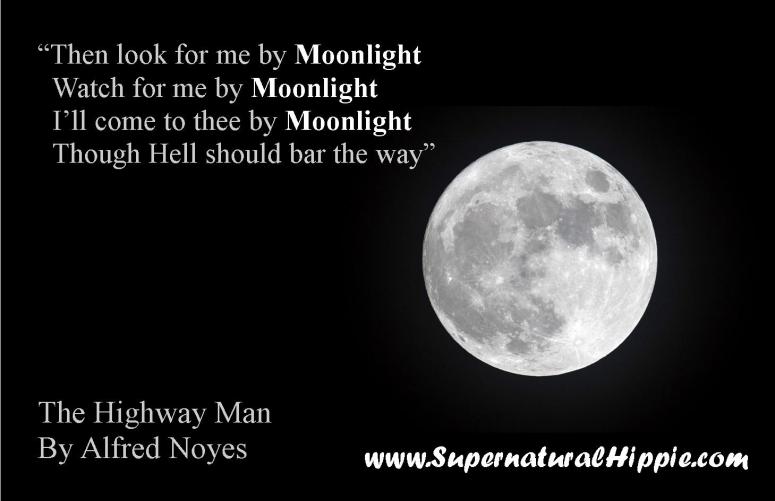 (This feature is copyrighted by SupernaturalHippie.com – Not to be reproduced without prior consent.)